1MW in the world by Bronte Hogarth – 1MW International Correspondent

It’s one month until the International Women’s Earth and Climate Summit happening this September in New York. Natalie Isaacs, 1MW CEO and Founder will be attending the 3-day summit alongside 100 woman delegates from all the world to help further a women’s climate action agenda.

The summit is organised by the International Women’s Earth and Climate Initiative, an organisation who like 1 Million Women recognise the unique power women have to offer now we’re at a turning point in the history of how humanity is living, the choices we are making about every day existence and how we treat this earth. Women are key!

Just look at the facts:

With an upcoming election in Australia, it’s sad to see that the issue of climate change is receiving little airtime, reflecting the attitude of many voters, who have been ranking climate change action 5th in policies that will affect their vote.

“Both the Opposition and the Government have the same target, a 5% emission reduction by 2020 against a 2000 baseline, but that’s at the very bottom of the range that Australia should aspire to, with a target of at least 25% by 2020 being far more appropriate to respond to scientific warnings of our climate peril.”

For those of us who are committed to action on climate change in our own lives, it’s scary to see this election does not reflect it from our leaders. As the facts above show,  countries with higher female parliamentary representation are more likely to make advances on sustainability and environmental issues, and in many countries women vote more often. Yet women continue to be underrepresented in national parliaments, and especially in environmental ministries at higher levels around the world. 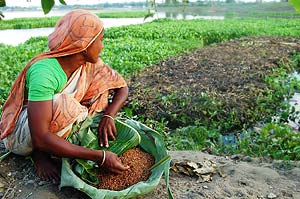 The women in the developed world have a big role to play because we have access to the information about our changing climate, and also a much greater carbon footprint than women in the developing world. There is a disproportionate impact on women in low income comminutes and developing countries, “the poor are especially vulnerable to the effects of climate change, and the majority of the 1.5 billion people living on $1 a day or less are women.” (5) Women in advanced countries like Australia need to be acting now, letting their voices be heard about the kind of world they want, showing governments that power is from the ground up.

We can’t forget this is an issue that affects us all! Climate change is already touching the lives of the world’s most vulnerable, but women in the developed world are not immune from its impacts now or in the future. Water shortages, floods, food scarcity, and extreme weather events threaten all of us. The IWECI summit is going to be a fantastic chance for women in the developed and developing world to come together and discuss woman-centered solutions to climate change.

You can keep up to date with everything in the lead up to the IWECI Summit:

3.WHO and UNICEF, Progress on Sanitation and Drinking Water.  2010 Update; UNDP, Resource Guide on Gender and Climate Change. 2009